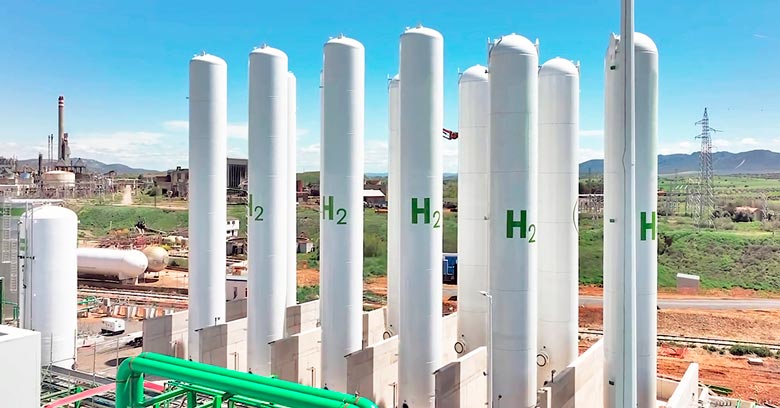 For a long time, China’s primary energy sources has come from coal, oil and natural gas. Over the last decade, fueled by geopolitical tension and the impact of the Covid-19 pandemic, China’s oil and gas supply has been heavily dependent on overseas markets and the volume of imported nature gas has increased steadily during 2010-2020. In addition, in 2021, 71% of China’s crude oil and 42% of its natural gas was imported from other countries. To ensure the country’s energy security, China is now stepping up its efforts to reduce its dependency on fossil fuels and to accelerate its energy transition, aiming to increase the usage of renewable energy sources such as solar, wind, nuclear and hydrogen. 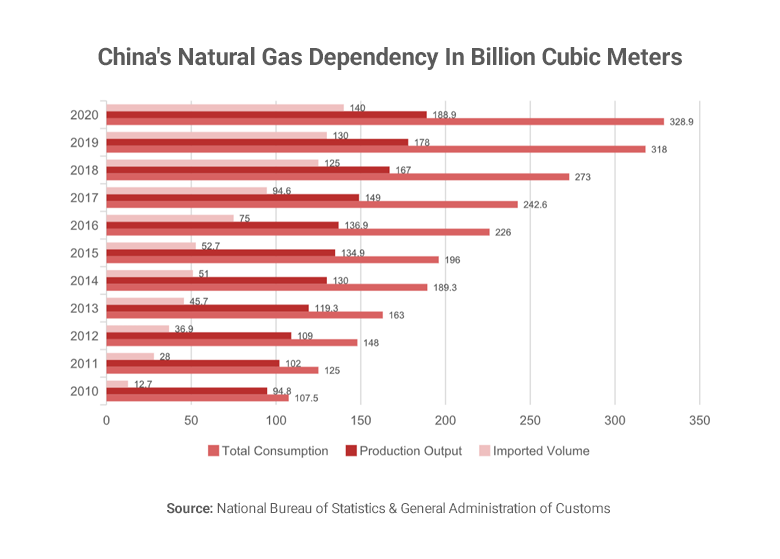 In 2021, China released an action plan detailing their aim to reach peak carbon emission by 2030, and carbon neutrality by 2060. Reforming the current energy mix with renewable energy is a key measure in reaching the target.

Hydrogen is a clean, versatile, and efficient form of energy and is the most abundant element on earth, making it practically an inexhaustible source of energy. It is expected to be one of the key elements in the path to China’s “net-zero” ambitions.

In March 2022, the National Development and Reform Commission (NDRC) and National Energy Administration (NEA) jointly released the country’s first mid to long-term plan for implementing and developing hydrogen usage in China, stretching until 2035. According to the plan, the projected volume for renewable-based hydrogen is aimed to reach within the range 100,000-200,000 tons annually by 2025.

Considering China’s large market size, production potential and the various policies supporting the hydrogen industry, the 2025 goal is quite modest and China is well on the path to reach the target.  Several green hydrogen projects have already been reached in favor of the goals. Even before the plan was released, China’s largest hydrogen producer, Sinopec, launched four green hydrogen projects. These include a solar-based hydrogen production facility with an annual production capacity of 20,000 tons in Kuqa, Xinjiang Uygur autonomous region, another wind and solar-based project in Ordos, Inner Mongolia autonomous region with an annual output of 10,000 tons, a renewables-based project in Ulaanqab, Inner Mongolia producing 100,000 tons per year, and an offshore wind-based project in Zhangzhou, Fujian province producing 10,000 tons per year.

The central government in China is expecting that, by 2025, renewable-based hydrogen could reduce the country’s carbon emissions by one or two million tons every year, a reduction of 17-33% compared to the country’s carbon emission 2020. Moreover, China is rapidly developing its manufacturing capacity for hydrogen production. By 2030, China expects to install 100 GW capacity of electrolyzer to produce green hydrogen. China Hydrogen Alliance (CHA), a government-supported association in the hydrogen industry, is more optimistic for the hydrogen production in the future. It boldly estimated that renewable-based hydrogen production could reach 100 million tons by 2060, accounting for 20 percent of projected final energy consumption.

Apart from hydrogen power, China is also planning on expanding its solar and wind generation capacity, aiming to double the current capacity from approximately 600 gigawatts (GW) in 2020, to 1,200 GW by 2030. 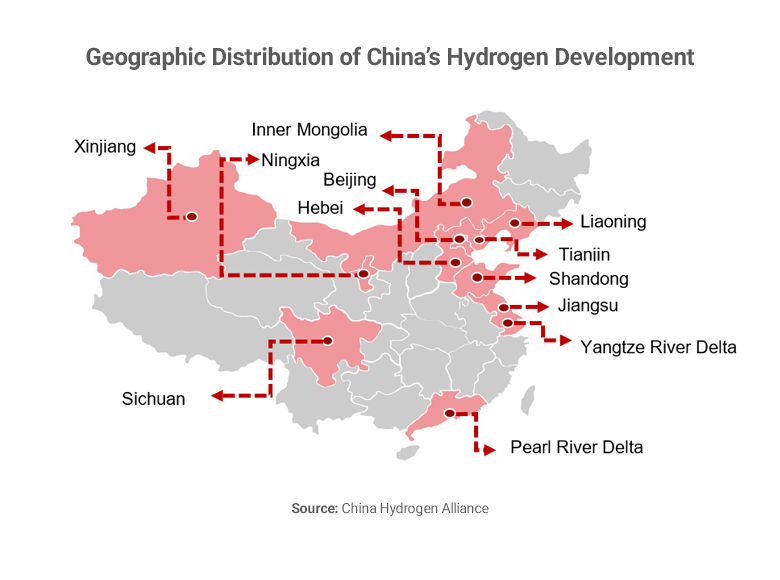 In wake of the central government’s call for carbon peak and carbon neutrality, more than 20 provincial governments have released a number of follow up plans with up to 200 incentive schemes supporting domestic hydrogen development. Local policies mainly focus on supporting use of land, subsidizing hydrogen production, and construction of filling stations. Up until now, several hydrogen industrial zones have been formed, including Beijing-Tianjin-Hebei economy zone, Yangtze River Delta, and Pearl River Delta.

There are 38 hydrogen energy industrial parks across the country which has enabled the continuous expansion of the hydrogen energy industry and the gradual improvement of the industrial chain. During 2021, despite China’s strict pandemic control policies and economic downturn, the numbers of newly registered hydrogen-related companies surged to more than 2200, an 89% increase from the previous year.

In comparison, other countries in Asia are also launching initiatives to shift towards a greener energy mix. Japan announced that it aims to reach a net zero greenhouse gas emissions by 2050. To decarbonize its economy, Japan is looking at measures such as innovative technology as well as alternative fuels including hydrogen. The road map ahead is quite clear, where they plan to introduce full-scale hydrogen -generation by 2030 and realize a full-fledge domestic use of hydrogen by 2050.

Similarly, Vietnam also aims to reach peak carbon emission by 2035 and achieve net zero emissions by 2050. The key target as of now is to lower greenhouse gas emissions by 43.5% by 2030 compared to the current state. With the Decision No. 888/QD-TTG, released July 25, 2022, Deputy Prime Minister Le Van Thanh approved the” National Climate Change Strategy to 2050”. Through this national strategy, the government plans to implement its COP26 commitments which include increasing its participation in low-carbon technology development, mobilize natural resources, and align the economy with its net-zero commitment. The goal is to develop a better response to climate change. 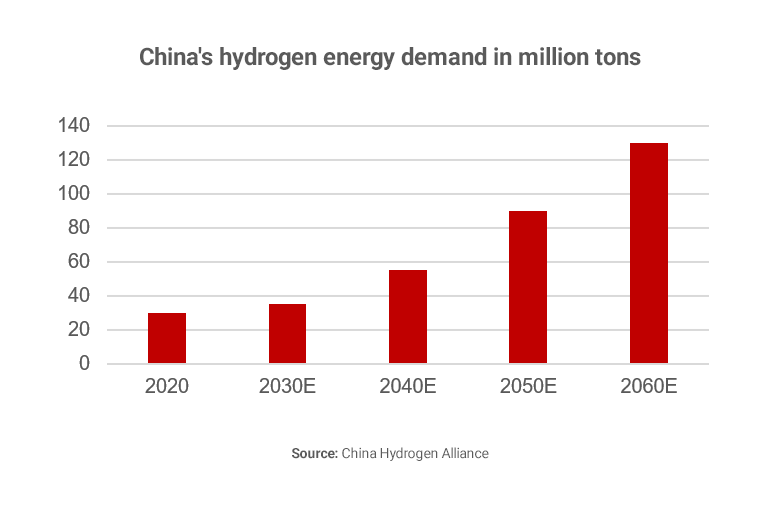 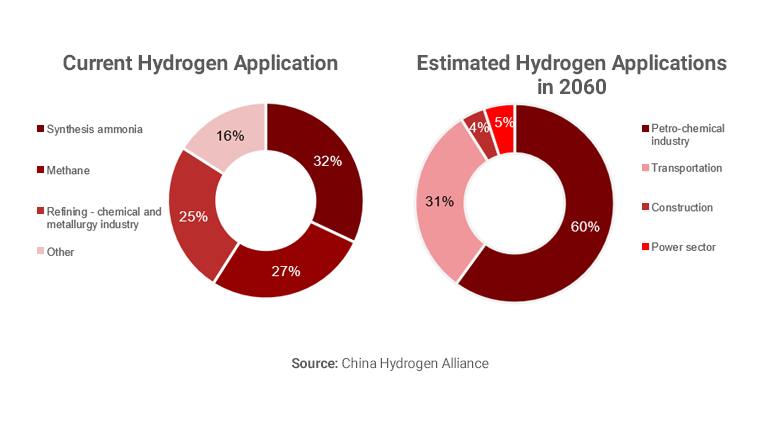 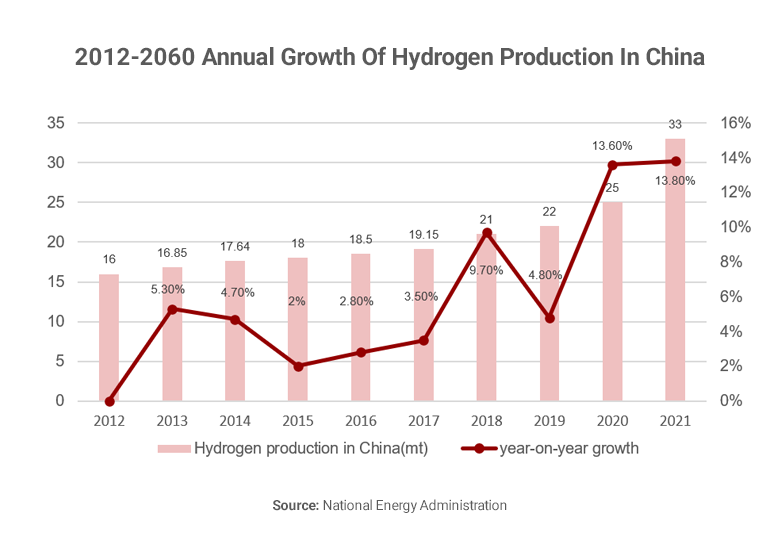 Challenges to Hydrogen Development in China

While hydrogen is gaining momentum in China, the development of the hydrogen industry is still far from smooth. Many challenges need to be addressed along the industrial chain. 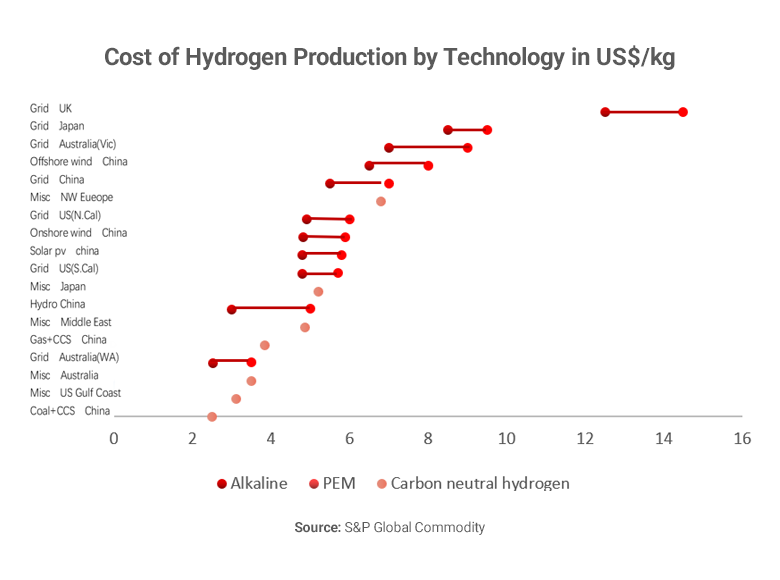 According to Special Administrative Measures for the Access of Foreign Investment (2020), foreign investment is encouraged in participating renewable energy development. Foreign investors are entitled ”equal treatment” as Chinese companies, many restrictions on market entry have been abolished or revised.  However, State Owned Enterprises (SOEs) are the main players in Chinese hydrogen industry and dominating along the industrial chain. Many foreign investors should establish a joint venture to easier gain access to the Chinese hydrogen market.

In China, government policies have a significant influence on industrial development. For the hydrogen industry, policies and plans have formed a favorable business environment to China’s hydrogen development. On the other hand, China welcome inventors with advanced technology to promote hydrogen energy development along the industrial chain, especially in the sectors of production, storage and transportation of hydrogen, FEM fuel cells and the establishment of filling stations.

Read more about our energy & environmental technology experience or other consulting capabilities.