FDI in Malaysia recovered remarkably from years of contraction 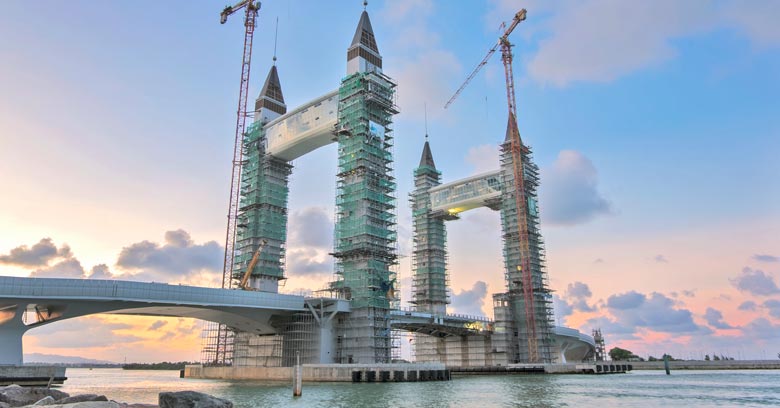 Foreign Direct Investment (FDI) has long been a key driver in the development of the Malaysian economy. Thanks to the government’s continuous efforts in making Malaysia an attractive FDI destination, the country witnessed an impressive growth of FDI inflows in 2021, breaking the downward trend from the last 4 consecutive years. The country has successfully regained foreign investors’ interest, a positive signal of economic growth and competitive edge recovery after the COVID-19 pandemic.

In the past four years prior to 2021, Malaysia’s FDI attractiveness had been declining substantially, which was only further worsened during the COVID-19 pandemic. It was pointed out by the Malaysian Investment Development Authority (MIDA) that the severe drop in net FDI inflows was the result of unstable politics, non-transparent and inconsistent policies, causing the foreign investors’ confidence to diminish. Moreover, uncertainties caused by the pandemic and the global political situation created a gloomy investment landscape worldwide, including for Malaysia. Fortunately, those days might now be left behind, as Malaysia experienced a strong positive increase of FDI inflows in 2021.

Malaysia’s net FDI inflows reached 10.9 billion USD in 2021, increasing 2.6 times from the 2020 figure. This is a new record compared to the previous record of 10.7 billion USD in 2016. Investment from countries in Asia are the biggest contributor to this growth, with a total of 5.1 billion USD invested, making up 46.7% of total investments. Among the Asian countries, Singapore, Japan, Korea, Hong Kong, and Mainland are the top five investors. It was followed by the U.S, which invested 4.2 billion USD. Europe ranked third with 1.3 billion USD, with the UK, Netherlands and Austria as the largest investing countries. 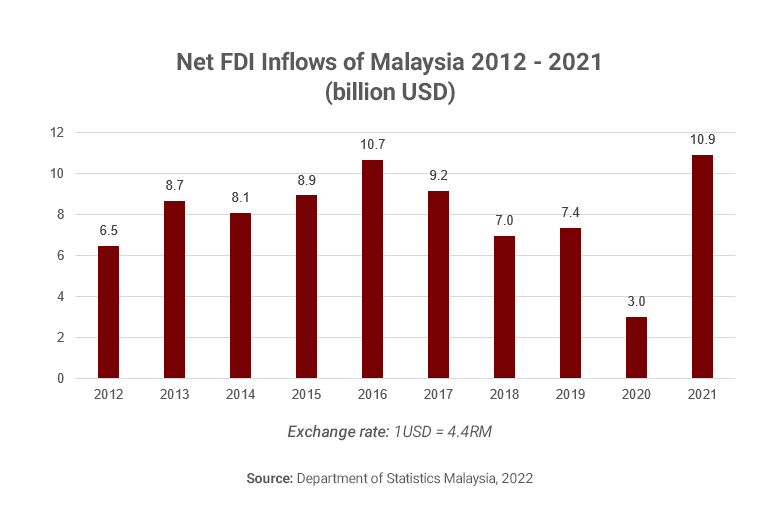 The sector receiving the most investments and that contributed to the growth in 2021 was manufacturing, with a total increasing from which had been severely impacted by the COVID-19 outbreak. E, transport equipment, and other equipment, followed by mineral and metal products, saw particular popularity, with 60% of the manufacturing investment going into these sectors. Manufacturing is gaining increasing interest from FDI investors, as its contribution to total FDI has become dominant since 2020, making up 53% and 61% of total net FDI inflows in 2020 and 2021 respectively. Meanwhile, it only accounted for 24% in 2019. The second biggest FDI sector was services, mostly in financial and insurance activities, which also rose significantly to reach 2.7 billion USD in 2021. However, services comprised only 25% of total net FDI inflows in 2021, a significant down from 54% and 40% in 2019 and 2020. This is different from the previous years when FDI poured the most into the service sector, with focus now clearly shifting towards manufacturing. 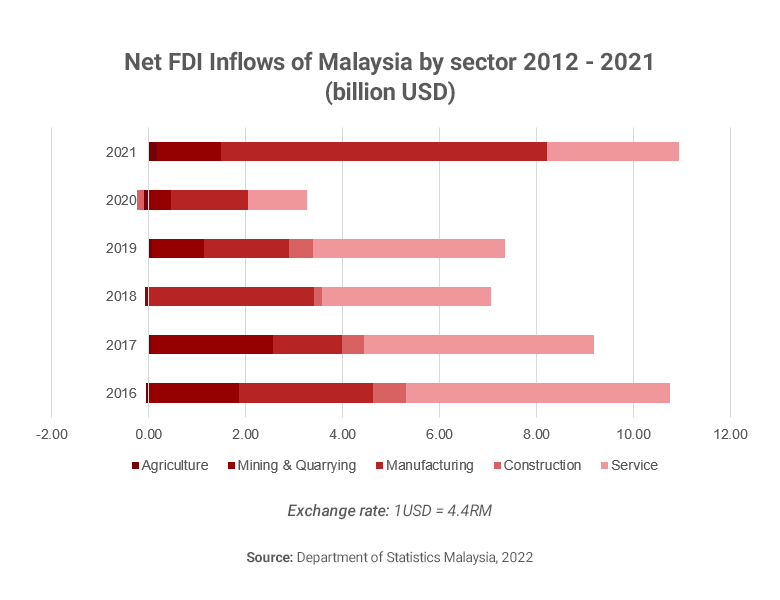 Moreover, investment globally has also been rising substantially, with the number of newly approved FDI investments in 2021 rising above pre-pandemic levels, to a new all-time high of 47.5 billion USD. The Netherlands, Singapore, China, Austria, and Japan accounted for 88.9% of total FDI approved. As of December 2021, Malaysia recorded 352 high-profile FDI projects, including Fortune 500 companies with a total potential investment value of 8.9 billion USD. Overall, technologically advanced are the key focus sectors in Malaysia attracting FDI.

For example, Intel Corporation (the U.S.) announced its investment of 7 billion USD in building a new semiconductor packaging and testing factory in Malaysia, which will begin production in 2024. This new investment is expected to create more than. In addition, Infineon Technologies (Germany) made Malaysia one of its regional manufacturing hubs by investing 4.5 billion USD in its integrated semiconductor manufacturing operation in 1999. Now the company announced that it will expand its semiconductors manufacturing base in Malaysia with a 2.27 billion USD investment. Further, Risen Energy, a Chinese solar energy company, chose Malaysia to be the location for building its first mega factory of photovoltaic modules in Southeast Asia, putting down 9.6 billion USD for 15 years.

Malaysia’s impressive achievement in reattracting foreign investment has stemmed from several factors. Malaysia has benefitted from the recovery of global FDI flows as countries started to reopen borders after months of lockdown. The Malaysian government’s relief from pandemic containment measures at the beginning of 2021 also helped to bring FDI flow into the country. Furthermore, the strong governmental support with clear investment promotion policies and implementations plays a vital role in FDI attraction. In the 2021 budget, extensions of tax incentives were proposed, including tax exemption for new companies or a 100% tax allowance for five years for manufacturing companies that relocate to Malaysia. In April 2021, the government announced the National Investment Aspirations framework that is aimed to reform Malaysia’s investment policies, enhance regional and global supply chain linkages, and develop economic clusters tied to key sectors such as electrical and electronic industry with advanced manufacturing technology.

To further promote new FDI projects, a new application method and procedure was implemented to simplify the process. The InvestMalaysia portal was launched in March 2021 as an online portal for investors to apply and manage their applications, from license approval status to granted incentives. This digitalization of investment applications is expected to speed up the approval process, which also contributes to the substantially increased number of approved projects in 2021.

In summary, Malaysia has seen a vibrant success with an impressive rebound in FDI attraction after the pandemic. The country broke its own records of net FDI inflows and approved FDI investments within the manufacturing sector, This achievement closely aligns with the government’s strategic goal in the long term. Through several promotion policies and investment environment improvements, the country has proved its increasing competitiveness in the regional FDI landscape, gaining trust and confidence from foreign investors. 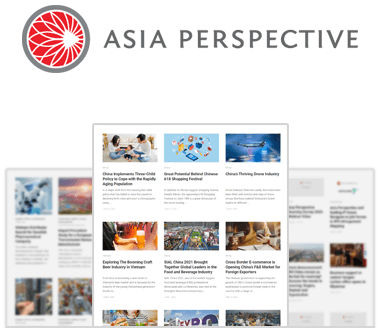