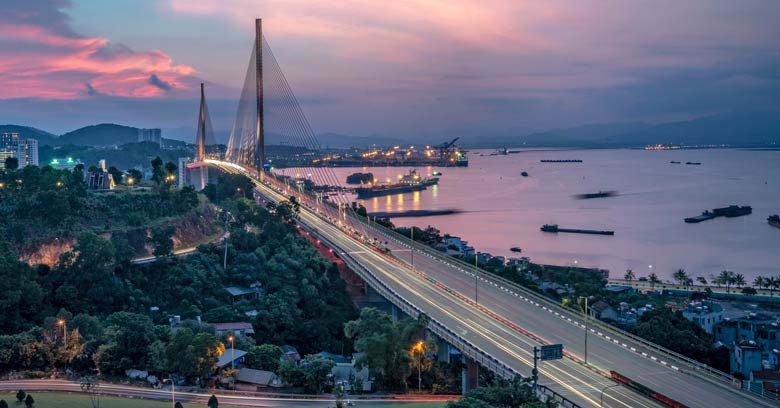 Enacted in 2005, the Provincial Competitiveness Index (PCI) report is a collaborative report developed by the Vietnam Chamber of Commerce and the United States Agency for International Development (USAID). The PCI is designed to assess each region’s ease of doing business, quality of economic governance, and results from reforms that local governments have created to promote development in the private sector. Data is collected from surveying both domestic firms and foreign-invested enterprises (FIEs) in multiple areas of doing business in Vietnam. 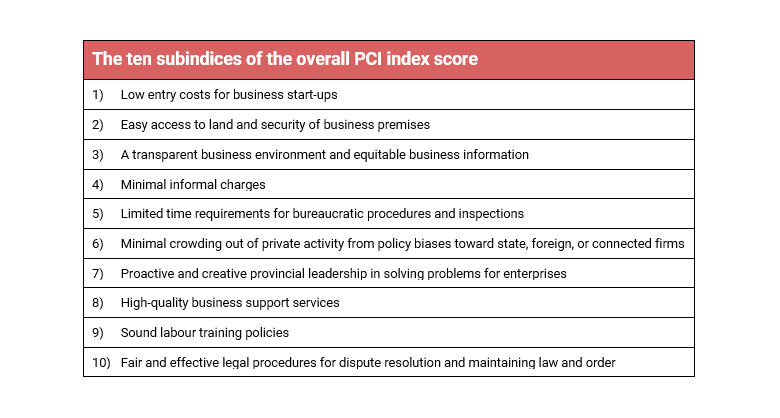 Quang Ninh Ranks Top of The List for the Fifth Year

The local government of Quang Ninh has put multiple efforts into improving its governance, including issuing Resolution 05-NQ/TU for strengthening administrative reform and improving the business environment and provincial competitiveness in 2021. Quang Ninh has also conducted reviews to improve and simplify the administrative procedures when doing business, reducing the regulated processing time by 40-50%. 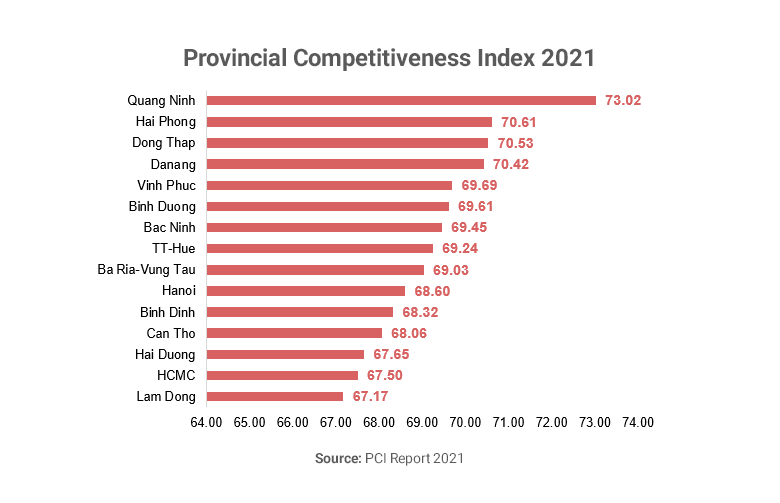 Thanks to its improved local business environment, Hai Phong came in second place for the first time since the start of the index, jumping 5 spots from 2020.

Dong Thap continued to be the leading in the Mekong Delta area. The province has extended its portfolio to activities that also support startups, and is investing in capacity-building to strengthen governance skills for household businesses. This subsequently strengthens links in local supply chains, particularly those in agricultural produce.

Vietnam’s major commercial and industrial cities, Hanoi and Ho Chi Minh City only rank 10th and 14th place. While these two cities are popular destinations for foreign investors, the fact that there are other provinces ranked better in the PCI show that there is a diverse pool of destinations for investments in Vietnam. New businesses in Ho Chi Minh City and Hanoi usually struggle with high rental fees, land prices, and the cost of production, which are consistently rising due to growing demand. Quang Ninh, Hai Phong, and Dong Thap may serve as affordable and investor-friendly alternatives for investors.

1. Local governments continue to promote proactivity and support for the private sector

Generally, firms are rating their provincial governments at the highest level since the PCI first started tracking these numbers in 2006. A positive outlook on provincial governments’ efforts to support businesses helps enhance business owners’ confidence in operating and expanding operations in the provinces. 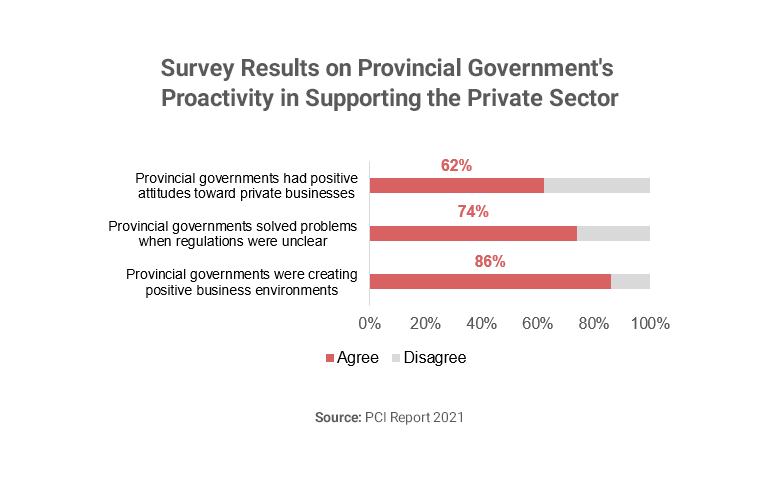 2. Informal charges continue to decline in most policy areas 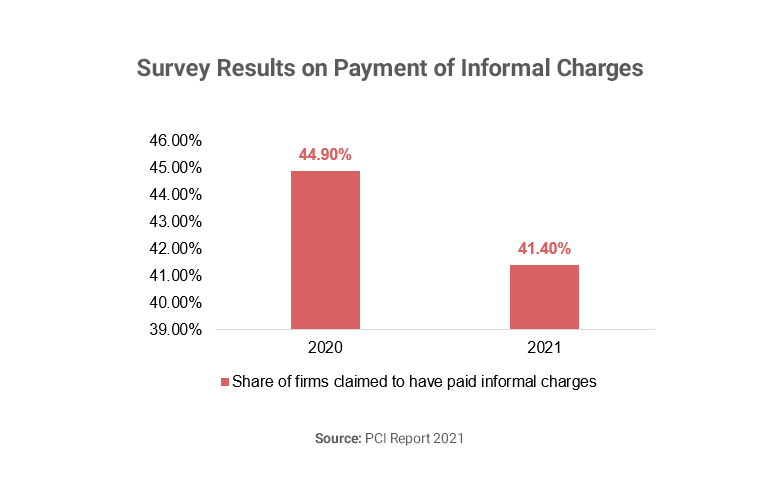 Informal charges reported by respondents declined by number and size. The decline can be attributable to the anti-corruption operation led by the central government and the efforts of local governments to foster public administration reforms. The rate is expected to continually contract in the future.

The overall opinion from firms is that the administrative procedures have improved with shorter processing time and simplifying paperwork, alongside a perception friendly officials. 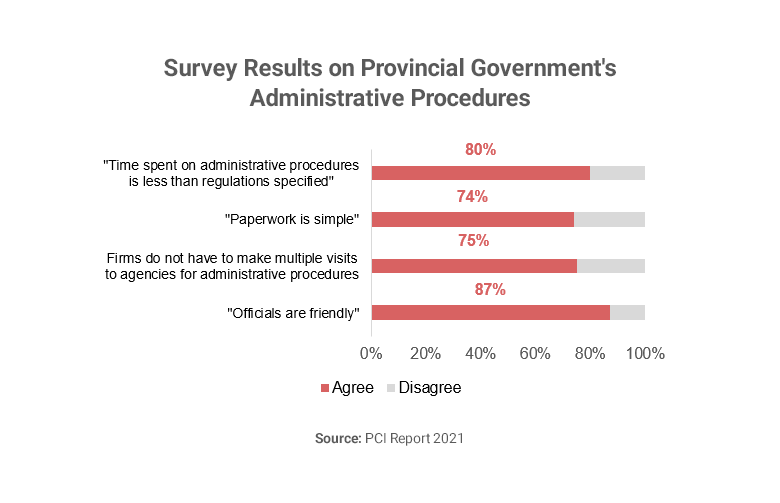 A sizable share of firms were dissatisfied with the way the procedure are handled. Only 38.9% agreed that they did not encounter difficulties when fulfilling conditional business license procedures. 21.7% of domestic firms had to delay or cancel their business plans due to troubles in registering sublicenses. The emerging compliance with conditional business sublicenses acts as a means to slow down business entry into the market. No improvement in the area would further complicate the growth of the businesses, as they aim to expand in the market.

The most concerning trend in the PCI 2021 is the continued decline in the Land Access & Security of Tenure subindex. 42.5% of firms reported challenges with complicated procedures for land rental and purchase, while 30.5% reported that land information and data were not provided conveniently. The decline in access to land would hinder opportunities for businesses to extend operations according to plan.

The Covid-19 pandemic left a strong negative effect on FIE’s performance. The share of FIEs that reported profit reached an all-time low in this decade (38.7%). The share of FIEs reporting losses also hit a record high since 2012 at 47.9%, an increase from 47.1% in 2020.

However, a surprisingly large share of foreign firms considered or planned expansion in the next two years (47.7%), noticeably higher than the previous year, where only 40.8% projected expansion after their operations recorded large declines. 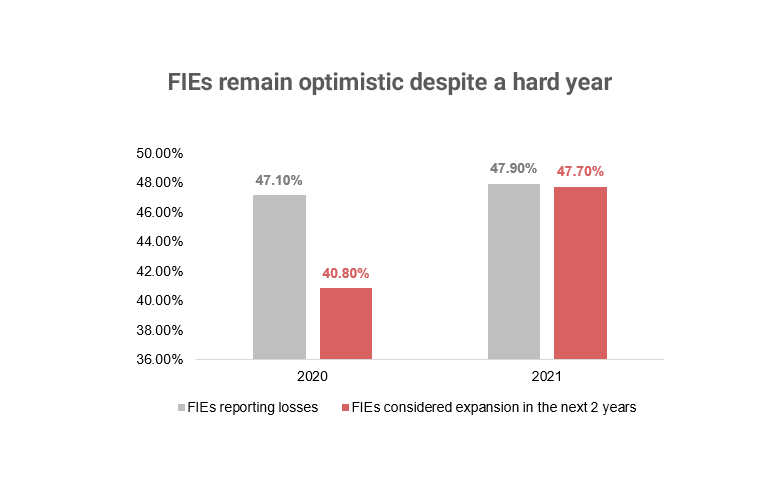 Foreign investors are also more satisfied with most major forms of Vietnamese infrastructure, including roads, electricity, telephone, internet, water, and industrial zones. FIEs that are in the government priority manufacturing sectors recorded improvements in most infrastructure types between 2017 to 2021, especially firms in the high-sophisticated electronics industry.

2021 was one of the most challenging years for Vietnam. Disruption in supply chains and movement shutdowns have led to an economic slowdown in the country. Regardless, positive results of the PCI show the provincial economic governance has had strong improvements in supporting its private sector. Administrative procedure reform and lowering informal charges are well appreciated by domestic and foreign businesses and enterprises alike. Provincial governments could focus on providing further improvements in land access and procedures, as well as broad promotion of supportive laws and regulations to help small and medium enterprises.