Vietnam’s Seaport System is set on Revitalization and FDI Attraction

Seaports in Vietnam play an important role in maritime infrastructure for local and international transportation. The industry showed growth in 2021 despite trading activities and supply chains being disrupted by the pandemic. 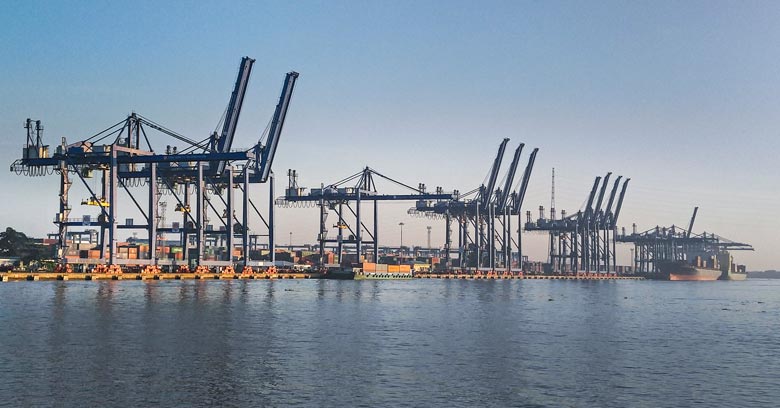 Consequently, the Vietnamese government are focusing on seaport development as a strategy for economic growth, and created a master plan to develop a modern seaport system by 2030, with a long-term vision stretching until 2050. Considering the industry’s high potential and the newly established master plan, Vietnam seaports are projected to witness a bright and sustainable development within the next decade.

Despite being heavily affected by the pandemic, the volume of cargo transported across seaports remained on an upward trend in 2021, reaching a total of 706.3 million tons, increasing modestly by 2% year on year. Particularly for container cargo, 24 million TEUs were shipped across Vietnam seaports in 2021, increasing by 7% year on year. In the first 4 months of 2022, the total volume of cargo increased 3% compared to the year before, reaching 236 million tons. The total annual volume is forecasted to grow stronger to approximately 750 million tons in 2022, up 6% from 2021.

The expected rebound is supported by the fact that Vietnam recently reopened its borders and fully resumed business and cross-border trading activities thanks to the high COVID-vaccination rate. In addition, Vietnam is growing as an attractive destination for FDI investments, which can be owed to a favorable investment environment, companies reshoring production to Vietnam, and benefits from many free trade agreements. FDI inflows witnessed an annual growth rate of over 8% in 2014-2021, boosting the volume of goods transported through Vietnamese seaports. Moreover, new FDI projects and investments that were postponed due to lockdowns in 2021 can now resume. Recognizing the important role and potential that the seaport system has in facilitating both domestic and cross-border goods transportation, the Vietnamese government introduced a master plan for the country’s seaport system development during the next 10 years, with a vision stretching to 2050. Under this plan, the country’s seaports are divided into 5 clusters which are distributed all over the coastal line. By 2030, the ports will have the capacity to handle 1.1-1.4 billion tons of cargo, a steep increase compared to the current capacity of 500 million tons, including container throughput being 38-47 million TEU. The new uniform seaport system aims to provide high-quality services, meet the demand for social-economic development, ensure national defense and security, and provide environmental protection. Thus, the seaport development is expected to improve economic competitiveness and help Vietnam achieve the goal of becoming an upper-middle-income developing country by 2030.

According to the plan, Vietnam has two special-class seaports, 15 class-I seaports, 6 class-II seaports, and 13 class-III seaports, which are classified by scale and function. The special-class seaports are given priority for upgrading the infrastructure of international gateway terminals, including the Lach Huyen Port in Hai Phong and Cai Mep Port in Ba Ria – Vung Tau. Additionally, investments will also be poured into other areas including the country’s Middle region and the Mekong Delta. Particularly, international transshipment ports are being developed in Khanh Hoa – in the Middle – and at a terminal at Soc Trang – in the Mekong Delta area – and are expected to become special-class seaports when completed. With the whole system of modern seaports in place, Vietnam expects to keep pace with seaports in the region and meet the criteria to be classified as green ports by 2050, with an average annual growth rate of 4 – 4.5%. 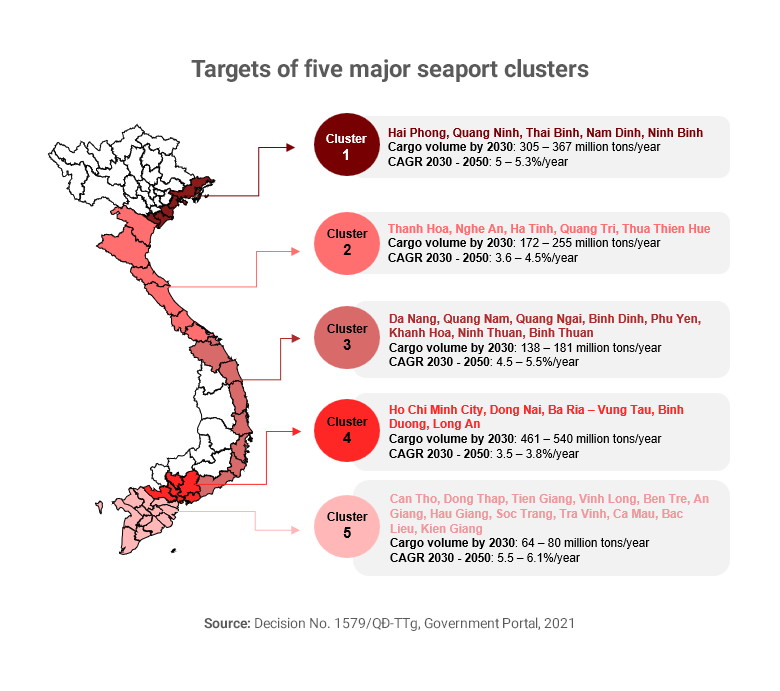 In order to succeed with the ambitious plan, the total investment needed by 2030 is about 13.6 billion USD, 95% of which will be mobilized from the private sector. State funding will be placed on public infrastructure and key constructions to attract investment from both local and foreign entities. This pattern of capital mobilization dates back to 10 years ago when Vietnam opened their doors to welcome foreign investors to invest in seaports. During 2011 – 2020, around 8.8 billion USD, or 21% of total investments in transport infrastructure, were poured into seaports, out of which 86% was from non-state budget capital.

Thanks to private and foreign investment, the seaport system in Vietnam has developed greatly in the past years. Notably, deep-water ports such as CMIT are hot spots that have been attracting a lot of investment in recent years. This new master plan offers more opportunities for both domestic and international investors, as the Ministry of Transport and local authorities will promptly unveil special policies and mechanisms that create more favourable conditions for private investments in seaports.

In summary, the seaport system in Vietnam is planned to be transformed to become a uniform system of ports throughout the coastal length of the country. The ports will feature advancements in service quality, infrastructure, sustainability, and environmental protection. To realize the plan, funding from the private sector, including both domestic and foreign companies. will be mobilized. This uncovers a great opportunity both for international companies who are interested in seaport investments, as well as the manufacturing industry as a whole as Vietnam’s seaports and export system improve.

Read more about our experience in market entry & expansion or our other consulting services.