Sourcing & Manufacturing in Vietnam: An Introduction 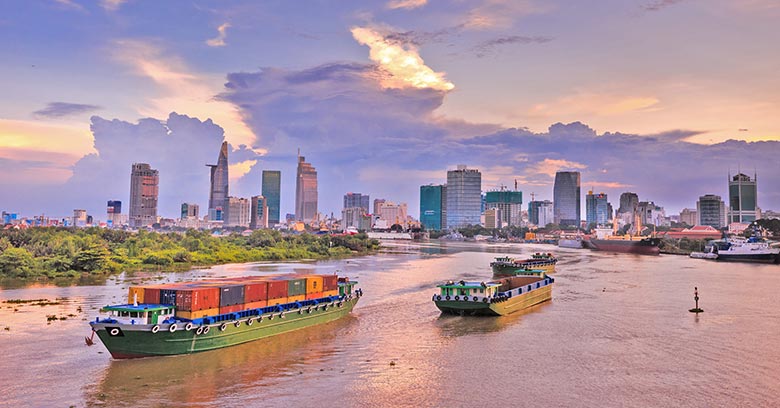 Vietnam has become one of Southeast Asia’s greatest beneficiaries of foreign investments in the past years. This can be attributed to both economic and demographic advantages.

Global events and supply chain disruptions have also made foreign companies aware of the importance of diversifying supply chains, which has benefited Vietnam greatly.

The US-China Trade War and Covid-19 pandemic have urged companies to relocate production to avoid tariffs and in relying on a single market.

In this article, we review the benefits of manufacturing in Vietnam and why it has become one of Asia’s most important manufacturing hubs.

Benefits of Manufacturing in Vietnam

Both external events and country-specific characteristics have turned Vietnam into a favorable manufacturing destination. Below, you can find some of the major benefits of choosing Vietnam for your manufacturing operations.

Large companies in the clothing and electronics industries have shifted much production to Vietnam, thanks to the low labor costs. Not only are labor costs around a third of China’s on average, but wages increase at a slower pace.

While we can’t solely compare labor costs when selecting a country for manufacturing, it can be a deal-breaker for larger companies like Adidas, Samsung, and the likes.

Shipping costs, productivity, and the maturity of existing supply chains also affect companies’ decisions to avoid relocations or to relocate just a part of the production.

While the populations shrink or see modest increases in Thailand, Malaysia, and China, Vietnam will see great population growth in the coming decade.

With a population of around 98 million, it’s forecasted that Vietnam will have around 106 million citizens by 2030. Naturally, this will expand the labor pool, which 56% of the population currently belongs to.

In contrast to China and Japan, Vietnam also has a young population with an average age of 32 years.

Vietnam is well-known for its vast production of clothing and textiles. In recent years, we have seen a great increase in the manufacturing of more advanced products such as automotive parts, machinery, consumer electronics, and telecom equipment.

Samsung, for example, produces a third of its output in Vietnam and is the country’s largest exporter.

As a member of ASEAN, Vietnam is part of The ASEAN Free Trade Area (AFTA).

The EU–Vietnam Free Trade Agreement (EVFTA) became effective in 2020. Thanks to the FTA, the EU and Vietnam plan to remove 99% of all customs duties.

Vietnam also has a bilateral trade agreement with the US and with tariffs following the WTO framework.

The Trans-Pacific Partnership (TPP) is also a major trade agreement that Vietnam is part of. Other members include Singapore, Malaysia, Brunei, Australia, New Zealand, Canada, Chile, Japan, Mexico, and Peru.

What Products are Manufactured in Vietnam?

Vietnam has sprung up as a favorable destination for the manufacturing of a wide range of products. In this section, we review the major product categories in terms of export value.

The exports of electronics play a vital role for Vietnam as an export nation. Samsung and Intel were two of the first foreign companies to set up vast manufacturing operations in the South, Japanese multinationals soon followed in the North.

Electronics dominate exports and where the following products accounted for the most as of 2021:

Being the second-biggest producer of smartphones globally, major companies like Foxconn and Samsung invest increasingly more in local electronics manufacturing.

Vietnam has traditionally been a large manufacturer of textile products and still is. The total exports of textiles and clothing products are around 40 billion USD per year. This is around 1/3 compared to the exports of electronics, which still dominate.

The footwear sector is particularly big, but all garments in general. Brands like Nike, Adidas, and Skechers have all shifted a vast amount of production to Vietnam, thanks to the developed supply chain, lower labor costs, and favorable trade agreements.

In addition to textiles, Vietnam has also been a large manufacturer of both furniture and wood materials. There’s an abundance of both small-sized and large companies that produce furniture in provinces like Dong Nai and Binh Duong.

More than half of the wood products are made in Binh Duong, a province located in proximity to Ho Chi Minh City.

According to the Vietnamese Customs, the exports of wood products increased by around 22% in 2021 compared to 2020, reaching USD 9.3 billion in value.

Notably, in 2021, Vietnam surpassed China as the biggest wood exporter to the US, which marked a historic shift.

Having a land area similar to Malaysia and Finland, we find a high density of manufacturing in the North and the South. Having around 6,000 factories in total, more than 70% of factories can be found in or near Ho Chi Minh City and Hanoi.

Let’s review some of the most important cities and provinces and what sets them apart.

Ho Chi Minh City is the biggest city in Vietnam and is located in the South. With a population of more than 9.2 million people, it’s considered the financial center and contributes the most to the national GDP.

Large electronics manufacturers of advanced products can be found in the outlying districts such as District 9, including Samsung, Jabil, and the likes. District 2, which borders District 9, doesn’t have many factories, but an abundance of showrooms.

Looking at the Western parts of Ho Chi Minh City, we find three districts with much furniture manufacturing: Cu Chi, Hoc Mon, and Binh Chanh. With that said, the factories here aren’t as big as in Dong Nai and Binh Duong.

Binh Duong is considered one of the most important manufacturing hubs in Vietnam, closely located to Ho Chi Minh City in the Northeast. The province has a population of around 2.7 million people with crucial transportation networks.

After Ho Chi Minh City, Binh Duong province is the second-largest recipient of foreign direct investments nationally, which speaks for its importance as a manufacturing hub.

Binh Duong is the home to many manufacturers in the agriculture, chemicals, textile, and furniture industries. Examples of foreign companies that have factories here include Nike, Adidas, and H&M.

LEGO is also in the process of setting up vast manufacturing operations in the province.

Dong Nai is one of the most important provinces for manufacturing and is located to the South of Binh Duong, bordering Ho Chi Minh City in the East.

Having vast production of agricultural products, Dong Nai is also the home to many manufacturers of textiles, electronics, and garments. Dong Nai has a population of more than 3 million and with important transportation networks in the South.

Examples of companies that have factories here include Schaeffler, Bosch, Hyosung, and more.

Long Thanh International Airport, one of Vietnam’s major airports, will be built in Dong Nai which will benefit the province largely. By 2040, the airport will be able to handle 100 million passengers and 5 million tons of cargo yearly.

Hanoi is the capital that serves as an important economic hub in the North. The city is home to 10 industrial parks and with many manufacturers in the electronics, telecom, and heavy industries.

In 2021, the electricity and electronics industries got the most investments, totaling 44%. The mechanical engineering industry came in second place with 24%, and other industries 32%.

In Northern Hanoi, you can find a high concentration of Japanese electronics manufacturers, including Denso, Panasonic, Sumitomo, Canon, and Molex. Thang Long Industrial Park is located here, started in 1997 and with Sumitomo as a major investor.

Industrial parks are dispersed around the outskirts of Hanoi and with much electronics manufacturing.

Bac Ninh is the smallest province in Vietnam, yet important for local manufacturing operations. The province is strategically located along important transportation routes that link Vietnam to China.

The province has much electronics and machinery production with companies such as Nokia, Canon, ABB, and Samsung. Three of Samsung’s six factories are located in Bac Ninh and the province will receive increasingly more investments in the coming years.

Bac Giang is a province located around 50 km from Hanoi where many agricultural products are grown. Much of its fruits are exported to other parts of Vietnam and China.

Bac Giang has become an increasingly important province for the manufacturing of more advanced products, thanks to its developed infrastructure and proximity to China. Foxconn has set up production here, totaling hundreds of millions of US dollars.

Foreign investments are primarily targeted towards the electronics, textiles, and solar panel industries.

The city has much manufacturing in the electronics and automotive industries. In 2019, LG decided to move all its smartphone production from South Korea to Haiphong. It also saw the highest growth in Vietnam at more than 15% in 2021.

Can Vietnam Replace China as a Manufacturing Hub?

Vietnam will not replace China in its entirety. Vietnam’s exports amount to around 10% of China’s and still have less developed supply chains. Many companies have invested much in China over a long time, making complete relocations unprofitable.

Besides, while we see more advanced manufacturing of products like machinery, electronics, and telecom equipment, Vietnam still relies on imports of many sub-components from China.

China’s growing consumer market also makes it worthwhile to keep at least parts of production there.

However, there are a handful of reasons why increasingly more companies seek to diversify manufacturing from China. Global supply chain disruptions, increasing costs, and hefty tariffs are some examples.

There’s even a term for this business strategy called China Plus One. Due to increasing costs in China and regulatory changes, surrounding markets have appeared on companies’ radars.

Vietnam is one of Asia’s largest beneficiaries of foreign investments and one of the regions’ most important manufacturing hubs. Due to global supply chain disruptions, external events, and country-specific benefits, increasingly more companies seek to manufacture here.

Benefits of choosing Vietnam as a manufacturing destination include its low labor costs, many trade agreements, enhanced manufacturing capabilities, and large labor pool.

Even if Vietnam won’t replace China as a global manufacturing hub, it will still receive significant investment as companies seek to diversify and follow China Plus One business strategies.

Read more about our sourcing & supply chain experience or our other consulting services.